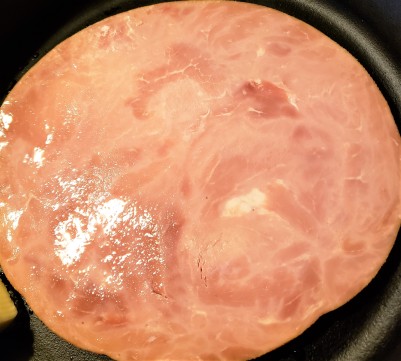 My dad had very interesting tastes.  He loved boiled beans that he would pour cream over.  He used to tell people it was part of his marriage contract; mom must always have a pot of beans on the back of the stove.  He would cut an avocado in half, remove the seed and combine mayo and ketchup in the hollow and enjoy the heck out of it.  But I think Red Eye gravy might be his favorite.

Red-eye gravy is a Southern favorite comprised of just two ingredients. It’s made from the drippings of fried country ham combined with black coffee. It may sound unusual, but it’s quite tasty and a fun way to spruce up an old-fashioned Southern meal of ham and biscuits, grits, or potatoes.

The name “red-eye gravy” is derived from the fact that a slightly reddish circle of liquid fat forms on the surface of the gravy when it is reduced. This sauce is also known as poor man’s gravy, red ham gravy, bird-eye gravy, cedar gravy, and bottom sop.

We had a few problems with these recipes.  The ham slice I remember from my youth did not look like these.  There was no fat ring around the outer edge like I remembered, so we didn’t get any ham grease.

I want to know what makes the “eye” in the gravy when you’re reducing it.  I tried 2 different recipes and it looked the same on both.  Odd.