Each year I make Christmas fudge for my brother.  I personally think you’d have to be nuts to eat fudge without nuts, but that’s the way he prefers it.  Isn’t that just nuts?  This is a very basic recipe that I got from Aunty Kay.  She always made it on top of the stove, so I do as well.  She is also the one who told me the secret of good fudge is in keeping it creamy.  The best way to do that is to stir the living daylights out of it.  Also, the longer it takes to cool down, the better the chance the fudge will stay creamy and not crystallize which is why you see a towel wrapped around the pan.

I will always have an affinity for chocolate fudge even though I’m not a fan.  When mom, Aunty Kay and Aunty Noma were young, they would occasionally be left alone on the farm for a few hours.  They would sneak sugar and chocolate and cream into a cup and heat it until it became something they could call fudge.  Mom was sure she would go to hell for doing anything against the rules, but that didn’t stop her.  Can’t you just picture those 3 young girls giggling over the wood burning stove until they had something edible.  All 3 of them would tell that story and they would all blame the one who didn’t happen to be there for breaking the rules.  So, as I’m making Paul’s fudge, I’m picturing those 3 tow-headed girls enjoying their fudge like Paul enjoys his.  Hold the nuts! 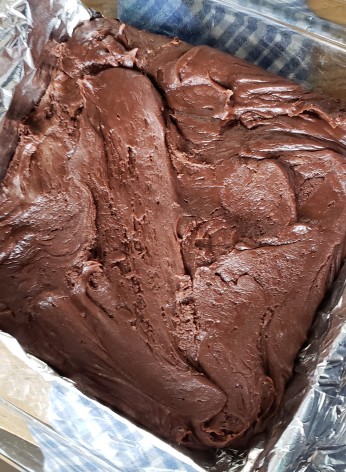 Line an 8 inch square pan with foil and then butter it.  Combine sugar, milk, butter and salt in medium saucepan.  Bring to a full rolling boil over medium heat, stirring constantly.  Continue cooking 4 to 5 minutes, keep stirring. Remove from the heat.  Stir in the marshmallows, chocolate chips and vanilla.  Stir vigorously for 1 minute until marshmallows are melted.  Pour into pan and cool at least 2 hours.  Store in the refrigerator.

* from the Recipe Box:

I make fudge every Christmas for Paul, hold the nuts.  I’ve tried lots of recipes, but I always come back to this one.  He’s a fan as well.  The more vigorously you stir, the creamier the fudge is.

I never have the right marshmallows, so hopefully this conversion chart will help you as much as it has me.

and remember:  Please put all questions into the form of a compliment.  Big kiss, Lynn