Holy guacamole, it’s less than 2 weeks until Thanksgiving and I have a new stuffing for you to consider.  I’m fairly traditional when it comes to the Thanksgiving meal; it is one of my favorite holidays after all.  This isn’t too risky though.  It has typical holiday meal ingredients, but they are revved up a bit.

OK, here I go again not giving you ingredient amounts.  The Hunka-hunka is one of 6 kids, my mom was one of 10.  I’m used to large family dinners with lots of stuffing.   So, instead let’s discuss what makes a good stuffing.

I start by browning country sausage.  I usually use Jimmy Dean’s, but any type of country sausage will do.  I want the pink gone, but you don’t have to go all the way to done; this will be baked.  I remove the sausage from the pan and toss in a cube of butter and at least a cup each of sliced celery and chopped yellow onion.  I saute these for about 5 minutes.  I want them tender but not limp.

In a very large bowl, I combine the sausage with the veggies and my initial salt, pepper and sage addition.   At this point, I also add approximately one cup of craisins.  Num.  The hot veggies soften up the craisins a bit.  I use Mrs. Cuthbertson’s stuffing, because I prefer cubes over crumbs.  It’s not overly spiced; I like adding my own sage, salt and pepper.  My taste runs to heavy sage.  I add at least one box of stuffing and sometimes 2 depending on the crowd size.   Give it a good stir.

Finally, the chicken stock is ready to join the party.  No water, only use chicken stock if you can.  The taste is astronomically better.  Depending on the amount of bread, you will add stock accordingly.  You don’t want it soupy, but you do want it very moist.  Take a pinch and give it a taste and then adjust your seasonings if needed. 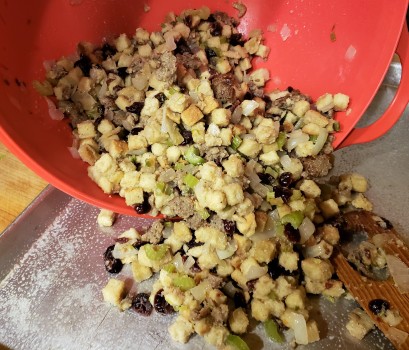 It’s time to put it in the pan.  I use a jelly roll pan.  I know what you’re thinking, but if you want crispy, crunchy stuffing, you want a shallow pan.  Spread it out evenly.  Here’s where I like to add a drizzle of melted butter on top.  We like it crunchy and that will help.

Bake your stuffing at 350-375 degrees for 30 minutes or so.  I usually give it a flip about half way through.  Look at those crispy bits.   I do not bake my stuffing in my turkey.  I think it gets too ooey-gooey that way.

If you don’t like craisins, leave them out.  I like the touch of sweetness they add and it still tastes great with gravy.