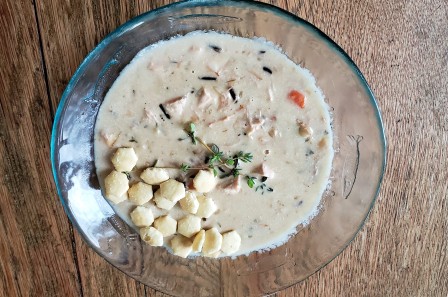 As I’ve mentioned before, I love soup.  I can’t think of one I don’t like.  Yes, I even like split pea.  This one is so creamy and the taste of thyme is lip-smacking good.  I could eat it every day.  It’s warming without being heavy.

Every recipe I found for this type of soup looked a little complicated, but it really shouldn’t be.  I’ve added a bunch of shortcuts I now take.   I wanted you to see the original recipe so you could make your own choices, but I’ve flown way past that stage.  I  have an apology.  I’m a recipe saver until I’m not.  I’ll see something in a magazine or on the side of a package or a talk show, and I’ll tear it out, make a screen shot, make a note.  Once I’ve tried it and we vote it’s a keeper, I type it up and put it in my 3-ring binder.  Away goes the original recipe.  I’m such a maroon.  I should be giving credit to whomever wrote the recipe originally.  If by some chance you recognize the recipe, let me know and I’ll give you authorship.  My bad, and I promise to do better in the future.

4 c. low-sodium chicken broth/more if you find it too thick

Greg took one bite of this and said it was the best spoonful of soup he’d ever put in his mouth.

The first time I made it, I couldn’t find the type of rice called for so I used a Rice a Roni type wild rice mix.  The next time, I found Lundberg Wild Blend Rice in the organic section, not an aisle I typically frequent.  I don’t know if it made a huge difference, but I’m sticking with the Lundberg.

I’ve since taken lots of shortcuts like Costco chicken, and it’s still incredible.   I use my carcass broth in place of purchased broth.

I serve this with Oyster crackers.  It looks like the poster child of white food.

Freezes ever so well.

and remember: Take a risk!  (You’ll thank yourself one day)